People around the world are being encouraged to spend their money not on material things but rather on experiences. Zambia Offers great places to visit with memorable experiences that will stay with you forever.In this section we share with you a few of these places and Yes our 4x4 Safari campers can take you there. .

1.Victoria Falls(One of the seven natural wonders of the world)

Victoria Falls presents a spectacular sight of awe-inspiring beauty and grandeur on the Zambezi River, forming the border between Zambia and Zimbabwe. It was described by the Kololo tribe living in the area in the 1800’s as ‘Mosi-oa-Tunya’ – ‘The Smoke that Thunders’. In more modern terms Victoria Falls is known as the greatest curtain of falling water in the world. Columns of spray can be seen from miles away as, at the height of the rainy season, more than five hundred million cubic meters of water per minute plummet over the edge, over a width of nearly two kilometers, into a gorge over one hundred meters below. CAMPING.Once you get to Livingstone you will have access to plenty of camping facilities both ordinary and 4x4 Safari camping. 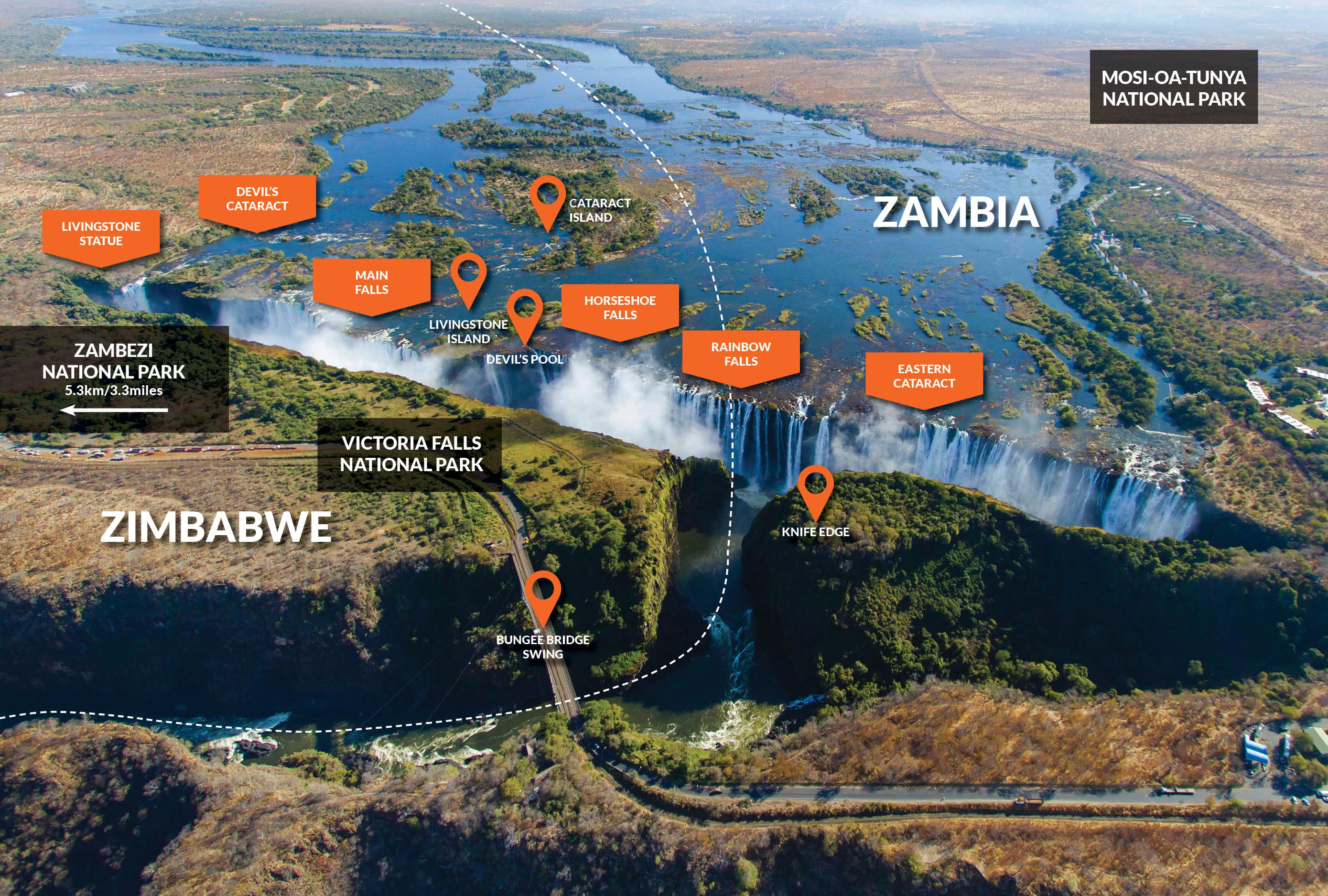 So far this is the most visisted park by tourists in Zambia.Experts have dubbed South Luangwa to be one of the greatest wildlife sanctuaries in the world, and not without reason. The concentration of animals around the Luangwa River, and its oxbow lagoons, is among the most intense in Africa. The Luangwa River is the most intact major river system in Africa and is the life-blood of this 9059 km2 Park. The Park hosts a wide variety of wildlife, birds and vegetation. The now famous ‘walking safari’ originated in this Park and is still one of the finest ways to experience Africa’s pristine wilderness first-hand. The changing seasons add to the Park’s richness, ranging from; dry, bare bushveld in the winter, to a lush, green wonderland in the summer months. There are 60 different animal species and over 400 different bird species in South Luangwa National Park. CAMPING.The Park offers plentifull camping facilities for ordinary and 4x4 safari campers 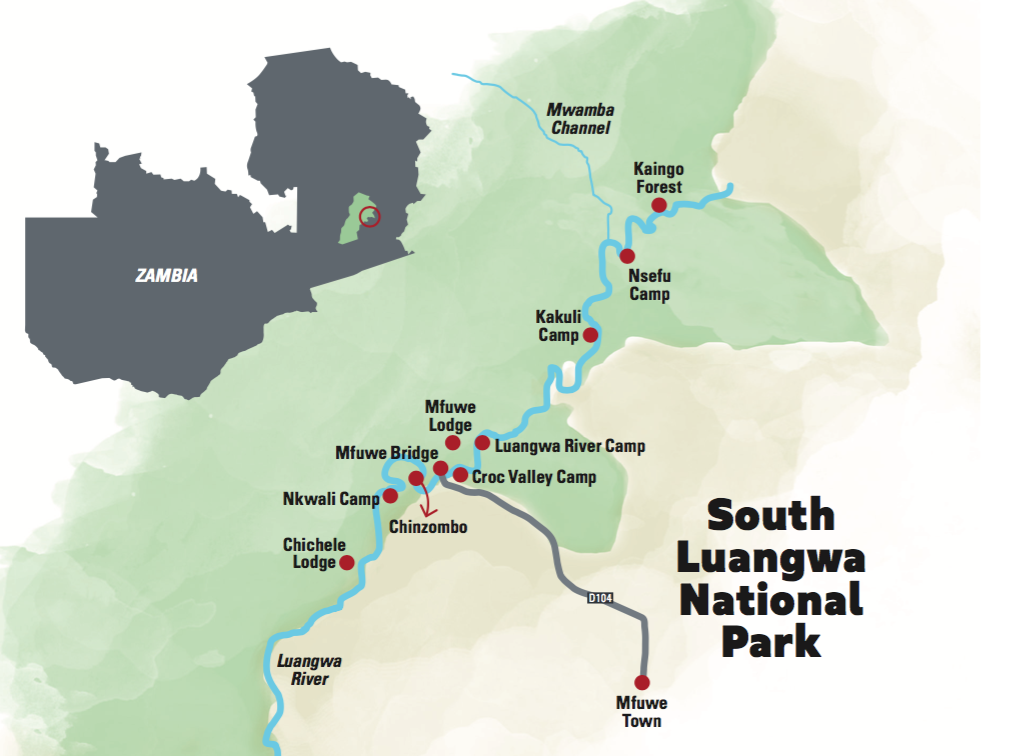 Found in the centre of western Zambia, Kafue National Park is the oldest and largest of Zambia’s national parks. It covers a massive 22,400 km2. First established as a National Park in the 1950’s by the legendary Norman Carr, Kafue is one of the largest national parks in the whole of Africa. Despite its size and prominent location only two hours drive from Livingstone, it remains little-known and largely unexplored with vast tracts of its virgin bush still untouched. Thanks to its size and variety of habitat types the Kafue holds a fantastic diversity of wildlife . In recent years the Park has seen a well-managed growth in the number of Safari Camps and Lodges that operate in and around the Park. This new interest has brought with it more visitors and investment to the area, notably in infrastructure with a number of well-graded roads and airstrips. As a consequence of the increasing interest and benefits in terms of investment this brings, the wildlife is beginning to enjoy an increased level of protection by the Zambian Wildlife Authority (ZAWA), always aided and supported by the operators in and adjoining the park. CAMPING.The Park offers plentifull camping facilities for ordinary and 4x4 safari campers 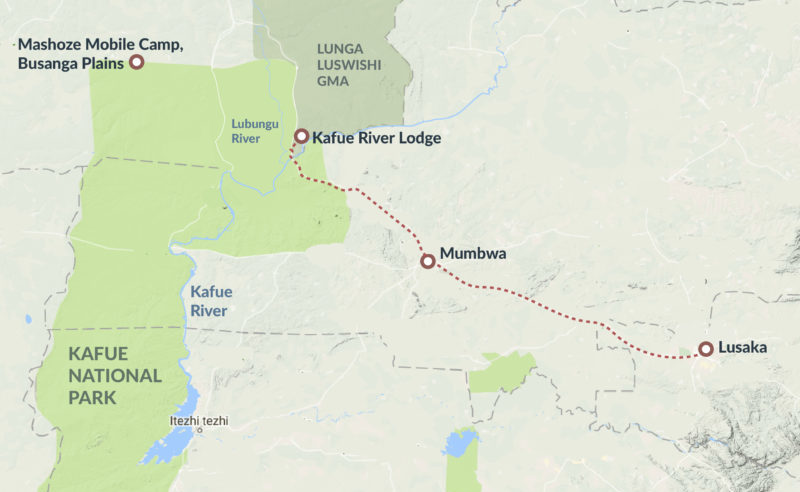 This is one of the top tourist destinations in the north of Zambia which is endowed with great lakes and massive wildlife.When one looks out over Lake Bangweulu, the grey blue waters disappear into the horizon, blending in completely with the colour of the sky. It is difficult to tell just where the horizon is. ‘Bangweulu’ means ‘The Place Where the Water Meets the Sky.’ The Lake is exploited more as a fish source than for its tourist potential. This is unfortunate, as it’s beauty is breathtaking. There are rumours of developing a tourist resort and having a luxury cruise boat for hire. But for the moment this is a an interesting stopover for the intrepid vehicle traveller or backpacker. The main catches in the Lake are Cychlids (bream, tigerfish, yellow belly) and catfish. About 57 000 metric tons of fish are harvested from the Lake each year. Although fish stocks are not in danger, catches are declining and the favoured species are becoming thinner. The fisheries of the Bangweulu are one of the largest in Zambia. This has lead to some of the highest population densities around the Lake where commercial fishermen have settled. Nevertheless the fishing industry is not economically well developed and inadequate controls and marketing facilities threaten both sustainability and profitability of the industry as a whole. Many of the fishermen trade their catches purely on a barter system for essential commodities. Samfya is the largest town on the Lake, developed in the mid 1900s as a fishing village. You can get basic supplies as well as fresh fish. There is a post office, clinic and adequate fuel supplies. CAMPING.The area offers plentifull camping facilities for ordinary and 4x4 safari campers

Lower Zambezi offers you the opportunities to get close to spectacular game wandering in and out of the Zambezi channels . The Park lies opposite the famous Mana Pools Reserve in Zimbabwe, so the whole area on both sides of the Zambezi River is a massive wildlife sanctuary. The River’s edge is overhung with a thick riverine fringe, including ebony and fig trees. Further inland is a floodplain fringed with mopane forest and interspersed with winterthorn trees and huge acacias. The hills which form the backdrop to the Park are covered in broadleaf woodland. 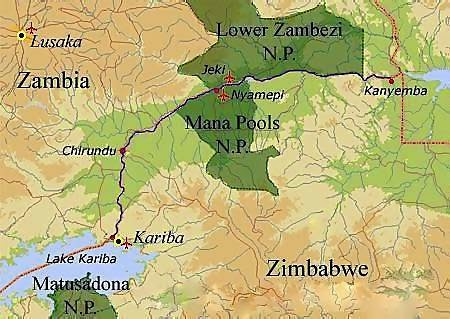